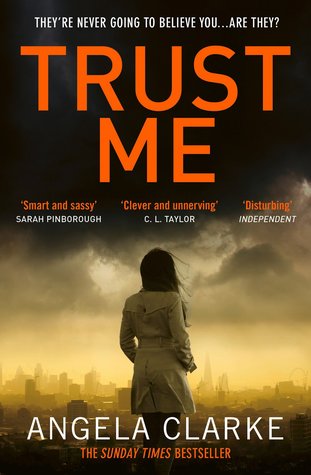 How did I get it?:
I received it from the publisher, Avon. Many thanks to them!

Previously reviewed by the same author:
Follow Me
Watch Me

What do you do if you witness a murder…but no-one believes you?

When Kate sees a horrific murder streamed live on her laptop, she calls the police in a state of shock. But when they arrive, the video has disappeared – and she can’t prove anything. Desperate to be believed, Kate tries to find out who the girl in the video could be – and who her killer is.

Freddie and Nas are working on a missing persons case, but tensions in the police force are running high and time is ticking. When Kate contacts them, they are the only ones to listen and they start to wonder – are the two cases connected?

Dark, gripping, and flawlessly paced, Trust Me is the brilliant third novel in the hugely popular social media murderer series.

This is the third book in the Social Media Murders series, and I swear the books are getting better and better. Whilst I enjoyed Follow Me, I thought Watch Me was even better and Trust Me certainly lived up to my expectations.

It centres around Kate, Nasreen and Freddie. Kate was watching live videos on the internet and saw someone being sexually assaulted and then stabbed. Pretty gruesome, right? Kate immediately phones the police and they’re not sure she’s telling the truth. There were no reports from anyone else and the account seems to have disappeared after the assault. Nasreen and Freddie feel like they have enough to go on to investigate Kate’s claims. Freddie believes Kate from the start and after a while Nasreen comes around. They’re determined to find out what has happened to the girl and see if there’s a link with another girl that’s gone missing.

I thought this book was really gripping. I wasn’t sure where it was going to go, but I was eagerly turning the pages. I thought it was incredibly well paced. I have really enjoyed getting to know Nasreen and Freddie better throughout the series. I definitely think both characters have got more likeable over time.

I’m glad to say that I didn’t predict what was going to happen. I love that in books! I like to be kept guessing and for me Trust Me did exactly that.

I don’t know if it was the author’s intention to make readers more wary of social media, but I really am more wary after reading this series. I always teach the children in my class (primary school) about internet safety, but I’d never thought about how dangerous it is for adults out there too.

A creepy crime read which can be enjoyed as a standalone! 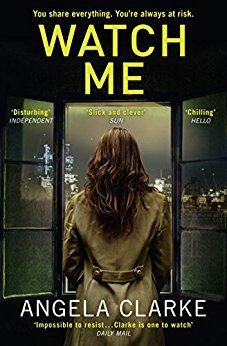 How did I get it?:
Received from the publisher, Avon- Many thanks to them!

YOU HAVE SIX SECONDS TO READ THIS MESSAGE…

The body of a 15-year-old is found hours after she sends a desperate message to her friends. It looks like suicide, until a second girl disappears.

This time, the message is sent directly to the Metropolitan Police – and an officer’s younger sister is missing.

DS Nasreen Cudmore and journalist Freddie Venton will stop at nothing to find her. But whoever’s behind the notes is playing a deadly game of hide and seek – and the clock is ticking.

YOU HAVE 24 HOURS TO SAVE THE GIRL’S LIFE.
MAKE THEM COUNT.

Watch Me centres around Nasreen and Freddie once more. Yet again, it highlights the dangers of the internet and how you never really know who is behind the messages. This book uses Snapchat as the media behind the crime. Chloe is dead and has sent a suicide note via the app. Another girl has been abducted and several people (including the police) have been sent a Snap to tell them they have 24 hours to save the girl’s life. The girl in question is the sister of DCI Burgone. Here starts a very intriguing read as the book spans the 24 hour period and the chase to save the girl’s life. Nasreen and Freddie put away the Hashtag Murderer (see previous book) and they’re surprised to see that there’s a link between that case and the current case. They can’t see how there can be a link between them, as he’s in prison with no internet…but if it isn’t him, then who is it?

Look out for the third book in this series, Trust Me, coming tomorrow!

A fabulous follow up to Follow Me, this book can be enjoyed as a standalone, but makes much more sense if you read its predecessor!